The UK’s nuclear stations, run by EDF, reached a major milestone this week, clocking up 2000 terawatt hours (TWh) of zero carbon electricity – enough to power all the UK’s homes for more than 18 years. 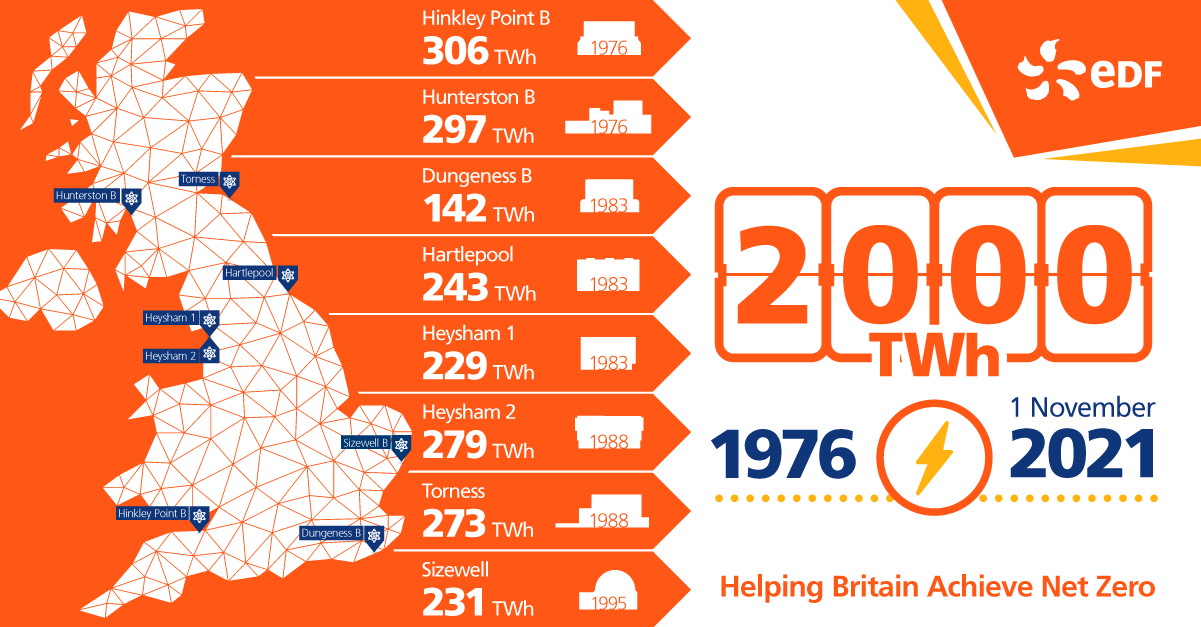 Since the oldest stations in the fleet first started generating in 1976 the eight sites across the UK have not only powered the country and sustained thousands of jobs – they have also helped it avoid the emission of 700 million tonnes of CO2.

Matt Sykes, managing director of EDF’s Generation business, said: “For decades the UK’s nuclear fleet has been quietly providing the nation’s zero carbon electricity. Originally it was thought our stations would operate for about 25 years. But thanks to careful stewardship, world leading engineering expertise and billions of pounds of investment, we have been able to generate safely well beyond those dates.

“We know nuclear can divide opinion. The undeniable facts are that we have kept Britain’s homes supplied with precisely the sort of reliable, zero carbon power the world is now crying out for – and all from an operational footprint less than one square mile. “In recognising this outstanding milestone, I want to pay tribute to the efforts of the people that work at these stations and in the overwhelmingly British supply chain. Many people talk about how to achieve net zero in the future. Today, the nuclear fleet raises its voice to remind us about the work already done.”

Greg Hands, Minister of State for Energy and Clean Growth at the Department of Business, Energy and Industrial Strategy, said: “This milestone demonstrates the key role that nuclear power has to play in Britain’s electricity mix, as the UK works to reduce its reliance on fossil fuels and exposure to volatile global gas prices.

“While more renewables will help us press on towards our world-leading net zero commitment, nuclear power has proven a reliable backbone to our energy system, and will continue to be needed for times when the sun isn’t shining or the wind not blowing.”

EDF’s nuclear business employs more than 5,000 people across sites in Lancashire, Teesside, East Lothian, East Kilbride, North Ayrshire, Suffolk, Kent, Somerset and Gloucestershire. Each year the nuclear business spends more than £800m through its supply chain, 93% of which is spent with UK companies, and since taking over the nuclear fleet in 2009 it has invested over £6bn in the plants.